The USDA has recently updated its nutrition guidelines, and for the first time, has included guidelines for breastfeeding moms, infants and toddlers.

Click below to see an except of the Dietary Guidelines for Americans 2020-2025 comprised of the breastfeeding and lactation information.

Husband and Wife Find Breastfeeding Worth the Effort 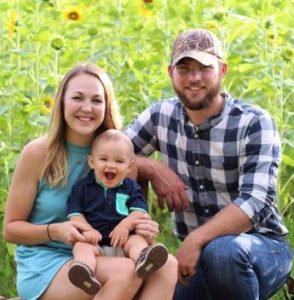 Stacy Durham and her husband Clint had the birth of their son mapped out: a healthy baby delivered full-term who easily breastfed, a standard hospital stay and return home to their new nursery. But as Stacy describes it, “it just wasn’t in the cards.”

Everything had gone smoothly during her pregnancy, but after a day of labor and two to three hours of pushing, they discovered that baby Carson had swallowed meconium mixed with amniotic fluid and didn’t take a breath for four minutes. The baby was rushed to NICU where he spent five days.

“They had brought him close to me before they took him away, but I don’t remember ever seeing his face,” Stacy said. “They had to get as much done as they could in the room to get him suctioned out. It was very nerve-wracking.”

Stacy’s primary care physician, Cassie Hunter, M.D., who had encouraged her to breastfeed, said the couple worked diligently to make sure their baby boy had the important colostrum and breast milk he needed while he was in NICU.

“She remained committed despite having to go to the NICU a floor away from where she was with a fresh C-Section wound,” said Hunter. “Since her production was low in the beginning (which is normal), NICU asked if they could ‘top’ off the feedings with formula to give the baby calories it needed. She pumped her heart out and was so worried that, since the baby got a bottle from the beginning of his life, that he would never nurse.” Hunter is also part of the breastfeeding initiative sponsored by UAMS’ State Physical Activity and Nutrition, a CDC grant to combat obesity.

Clint did what he could to help in supplying the baby with breastmilk. He walked the freshly pumped milk upstairs to NICU every two hours and washed the breast pump between sessions.

Carson was born on a Friday, but it wasn’t until Sunday that he got to feed at his mom’s breast. He transitioned well, though, and every two hours he would latch on with supplements ceasing the following day.

“All in all, I was only able to breastfeed six months, and then I had to pump because I went back to work as a teacher,” Stacy said, who teaches second grade at Hillcrest Elementary in Lynn, Arkansas. Actually, Stacy surpassed the average time moms breastfeed their infants in Arkansas. A recent report by the CDC showed that only 43 percent of Arkansas moms breastfeed to the six-month mark. The American Academy of Pediatrics recommends that all infants be breastfed at least six months to get the full benefits, such as reducing risks of asthma, obesity, Type 1 diabetes and other diseases in infants. But as Stacy’s story illustrates, it’s critical to have the support from healthcare professionals, family and a worksite that is breastfeeding friendly.

She offers this piece of advice to new moms: “Breastfeeding isn’t the easiest route to take and you will have hurdles to overcome, but do your best. It’s worth it.”

Here are a few updates on breastfeeding in the midst of COVID-19.

Get CDC information for family medicine providers to share with pregnant and breastfeeding moms.

Online courses for breastfeeding from the American Academy of Pediatrics.