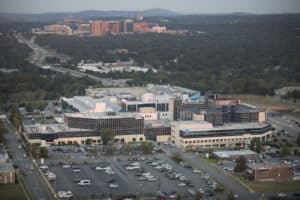 Arkansas Children’s Hospital with the UAMS campus in the distance.

Arkansas Children’s Hospital is a private, nonprofit, free-standing children’s hospital with 370 beds. Established in 1912, the hospital underwent rapid growth in the 1980s and is now one of the nation’s largest children’s hospitals. The hospital serves as the major pediatric teaching affiliate for the University of Arkansas for Medical Sciences.

The hospital is the primary pediatric medical center in the state of Arkansas (Arkansas Childrens’ opened a campus in Northwest Arkansas in 2018), and serves as a referral center for areas of southern Missouri, eastern Oklahoma, northern Louisiana and northeast Texas. Nationally renowned programs such as the pediatric cardiovascular surgery program and the ECMO program attract patients from other areas of the country as well.

In 2012, Arkansas Children’s Hospital debuted its largest-ever construction project, a 258,000-square foot expansion, the South Wing.  The South Wing expands the hospital’s pediatric Heart Center and Neonatal Intensive Care Unit, increases the total bed availability to 370 and creates a new Emergency Department with an orthopedics suite, decontamination unit and dedicated trauma unit.  The Hematology/Oncology and Infant-Toddler Unit will relocate to the South Wing as well as the Dental Clinic and the Audiology Department.

The hospital also operates a neonatal and pediatric transport service which uses two helicopters, three ground vehicles, and has a variety of fixed-winged aircraft available. All pediatric transports include a resident physician or fellow, transport nurse and respiratory therapist.  Residents are able to participate in the transport program after completing the pediatric ICU rotation.

University of Arkansas for Medical Sciences 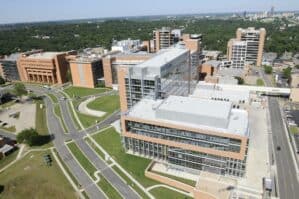 In January 2009, UAMS opened a 10-level, 540,000-square-foot medical center to replace the original 1955 University Hospital. The UAMS Medical Center serves as the central teaching point for residencies in 25 specialties, including Internal Medicine. The hospital includes 234 adult beds and 64 neonatal beds, along with 40 inpatient beds in the adjacent Psychiatric Research Institute for a total of 437 hospital beds. 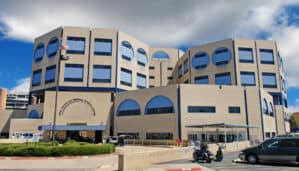 The CAVHS is one of the largest and busiest VA medical systems in the country. Its two hospitals, located in Little Rock (John L. McClellan Memorial Veterans Hospital) and North Little Rock (Eugene J. Towbin Veterans Healthcare Center), anchor a broad spectrum of inpatient and outpatient healthcare services, ranging from disease prevention through primary care, to complex surgical procedures, to extended rehabilitative care. This system serves as a teaching facility for more than 1,500 students and residents enrolled in more than 65 educational programs; its principal affiliate is the University of Arkansas for Medical Sciences. The Little Rock facility is adjacent to the UAMS campus and is connected via a covered walk bridge.

Throughout its rich 90 year history, CAVHS has been widely recognized for excellence in education, research, and emergency preparedness, and—first and foremost—for a tradition of quality and caring for Arkansas veterans.