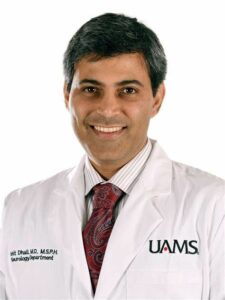 Rohit Dhall, M.D., MSPH, CPE, a professor of neurology who is director of neurodegenerative disorders at the University of Arkansas for Medical Sciences (UAMS), has been named the first-ever vice chair for clinical research in the College of Medicine’s Department of Neurology.