Research in the Department of Otolaryngology — Head and Neck Surgery is cross-disciplinary in nature and addresses questions in both clinical and basic science. The long-term goal of the research department is to teach residents the scientific method with a high degree of scientific rigor. Because of this, external funding can be obtained, further increasing the scope and quality of the program. We have been successful in obtaining research support from the National Institutes of Health, the Department of Defense, the American Cancer Society, the National Science Foundation, the National Space Biomedical Research Institute, NASA, several private foundations, and private industry. Research results are presented on the national and international stage and published in peer-reviewed clinical and basic science journals.

Our internationally regarded clinical laser program has given rise to a number of research projects designed to elucidate the mechanisms inherent in laser treatment of vascular and pigmented lesions.

Photothermal research is being performed to measure its effect on tumor growth and suppression, along with other applications. Our department has received major grants from NIH, Department of Defense and NCI to study photothermal therapy. The lab is currently funded by an NIH R01 and an NIH Small Business Technology Transfer (STTR) grant.

Gresham Richter, M.D., launched Vascular Anomalies research at Arkansas Children’s Hospital. He is interested in understanding the mechanisms behind vascular lesions as well as finding a cure. This work is currently funded on a DOD grant in collaboration with Columbia University.

Graham Strub, M.D., Ph.D.,  joined the department in 2018. His time is split 50/50 between the lab and his clinical duties. His main focus is the identification of microRNA networks driving vascular malformation growth. In his short time here, he has received the Marion B. Lyon New Scientist Development Award and an ASPO Career Development Award. He is also a junior investigator on the Center for Translational Pediatric Research grant, an NIH funded COBRE under the direction of Alan Tackett, Ph.D. 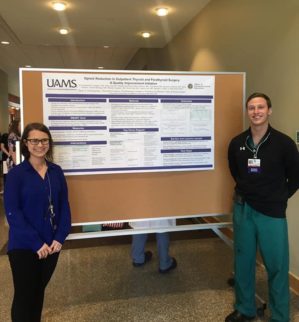 A variety of clinical research opportunities are available at UAMS and ACH including chart review, quality improvement studies, animal studies, and clinical trials. Ongoing projects include a universal hearing screening project in conjunction with the Arkansas Department of Health, an animal model of airway reconstruction, a clinical trial for a device to detect circulation melanoma cells, a clinical trial for detection and measurement of response for tonsil SCC, and a number of cooperative group trials and pharmaceutical companies.

Residents are encouraged to choose projects based on their own interests. One of our PGY-3 residents, Erin Creighton, M.D., started a QI project as an intern and has continued forward and now has her own funded project “Opioid Reduction in Outpatient Thyroid and Parathyroid Surgery.”