Congratulations to Shreyam Tripathi for winning the poster category at the 2022 Arkansas Regional Junior Science and Humanities Symposium (JSHS). Mr. Tripathi is a junior at the Arkansas School for Mathematics, Sciences, and the Arts (ASMSA) who has been working in the laboratory of Dr. Robert Eoff at UAMS. At the JSHS, Mr. Tripathi presented a poster entitled “Investigating the role of Rev1 in maintaining accurate DNA replication past G4 containing regions in the leading and lagging strands” detailing experiments he performed in the Eoff lab with guidance from Dr. Amit Ketkar.

The Arkansas Regional JSHS was held at Arkansas Tech University on March 11-12 and is a Tri-Service STEM competition sponsored by the U.S. Army, Navy, and Air Force. The study was supported by a grant from the National Science Foundation (MCB 1903357 to R.L.E.) and is part of an ongoing collaboration between Dr. Eoff and ASMSA students and faculty.

In this webinar from the National Research Mentoring Network, Dr. Jamie Robinson from Columbia University will share best practices and tips for writing a NIH Individual Fellowship Grant Application followed by a Q and A session.

Haven Griffin and Haley Lowe are the new student representatives on the Graduate Education Committee. Students should let them know about any concerns or issues they want to bring to the attention of faculty.

The UAMS Graduate school held their annual Three Minute Thesis competition on February 22. Three Minute Thesis or 3MT® is a competition developed by the University of Queensland to celebrate research and develop research communication skills. Students have three minutes to explain their research to a non-specialist audience with one static slide. Finalists for the Graduate School included BCMB students Jessica Kelliher and Matthew Thompson. Jessica’s mentor is Justin Leung, and Matthew’s mentor is Alicia Byrd. Lance Benson, also a GPIBS student won the People’s Choice Award. Congratulations to all!

Researchers at the U of A have demonstrated the first use of a noninvasive optical technique to determine complex biochemical changes in cancers treated with immunotherapy.

“We show that optical spectroscopy provides sensitive detection of early changes in the biomolecular composition of tumors,” said Narasimhan Rajaram, associate professor of biomedical engineering. “This is important because these changes predict response to immunotherapy with immune checkpoint inhibitors. Thus, our work is the first step in determining whether Raman spectroscopy can identify treatment responders and non-responders early during the course of therapy.”

The study, published in Cancer Research, a journal of the American Association for Cancer Research, describes the use of Raman spectroscopy to determine the molecular composition of colon cancer tumors in mice treated with two types of immunotherapy drugs currently used in the clinical treatment of patients.

Raman spectroscopy uses optical fibers to direct near-infrared laser light to biological tissue. The Raman signal scattered from the tissue is especially sensitive to the molecular composition of the tissue.

For this study, the researchers used machine-learning approaches to train hundreds of Raman datasets acquired from colon cancer tumors treated with different immunotherapy drugs. They then tested the data from each tumor against the overall dataset to determine the difference between tumors that had received various types of immunotherapy and tumors that did not receive any therapy.

The Raman technique demonstrated sensitive detection of early changes in the biomolecular composition of tumors and differentiated tumor response to different treatments. Changes picked up by the non-invasive Raman probe were consistent with changes described by detailed tissue analysis, the researchers found.

Unlike other forms of cancer treatment, immunotherapy does not result in an immediate and predictable reduction in tumor size, and there are currently no accurate methods to determine treatment response in patients. Only a small group of patients benefit from immunotherapy, and there are severe side effects associated with specific combinations of immunotherapy.

Rajaram partnered with Ishan Barman, associate professor of mechanical engineering at Johns Hopkins University, and Alan J. Tackett, deputy director of the Winthrop P. Rockefeller Cancer Institute and professor of biochemistry at the University of Arkansas for Medical Sciences. Joel Rodriguez Troncoso, graduate student in biomedical engineering at the U of A, and Santosh Kumar Paidi at Johns Hopkins University were lead authors on the paper.

In addition to Rodriguez Troncoso and Kumar Paidi, co-authors of the paper were Paola Monterroso Diaz, Jesse D. Ivers and David E. Lee at the U of A; Piyush Raj from Johns Hopkins University; and Nathan L. Avaritt, Allen J. Gies, Charles M. Quick and Stephanie D. Byrum from the University of Arkansas for Medical Sciences.

A shout-out to MD/PhD student Lauren “Clai” Morehead, who just received a 2022 Medical Student Research Award from the Melanoma Research Foundation. The grant is the latest honor for Clai, who has presented nationally and garnered acclaim for her research into potential treatments for melanoma with mentors Dr. Alan Tackett and Dr. Isabelle Racine Miousse in the Department of Biochemistry and Molecular Biology and the Winthrop P. Rockefeller Cancer Institute. Well done!

The Melanoma Research Foundation (MRF) has been awarding Medical Student Research Grants since 2011 and since that time, 80 grants have been awarded to students at 46 different institutions. The purpose of this one-year, $3,000 grant is to promote research opportunities to medical students early in their careers by funding clinical or laboratory-based research projects focused on better understanding the prevention, biology and treatment of melanoma, including cutaneous, ocular, mucosal, pediatric, etc. 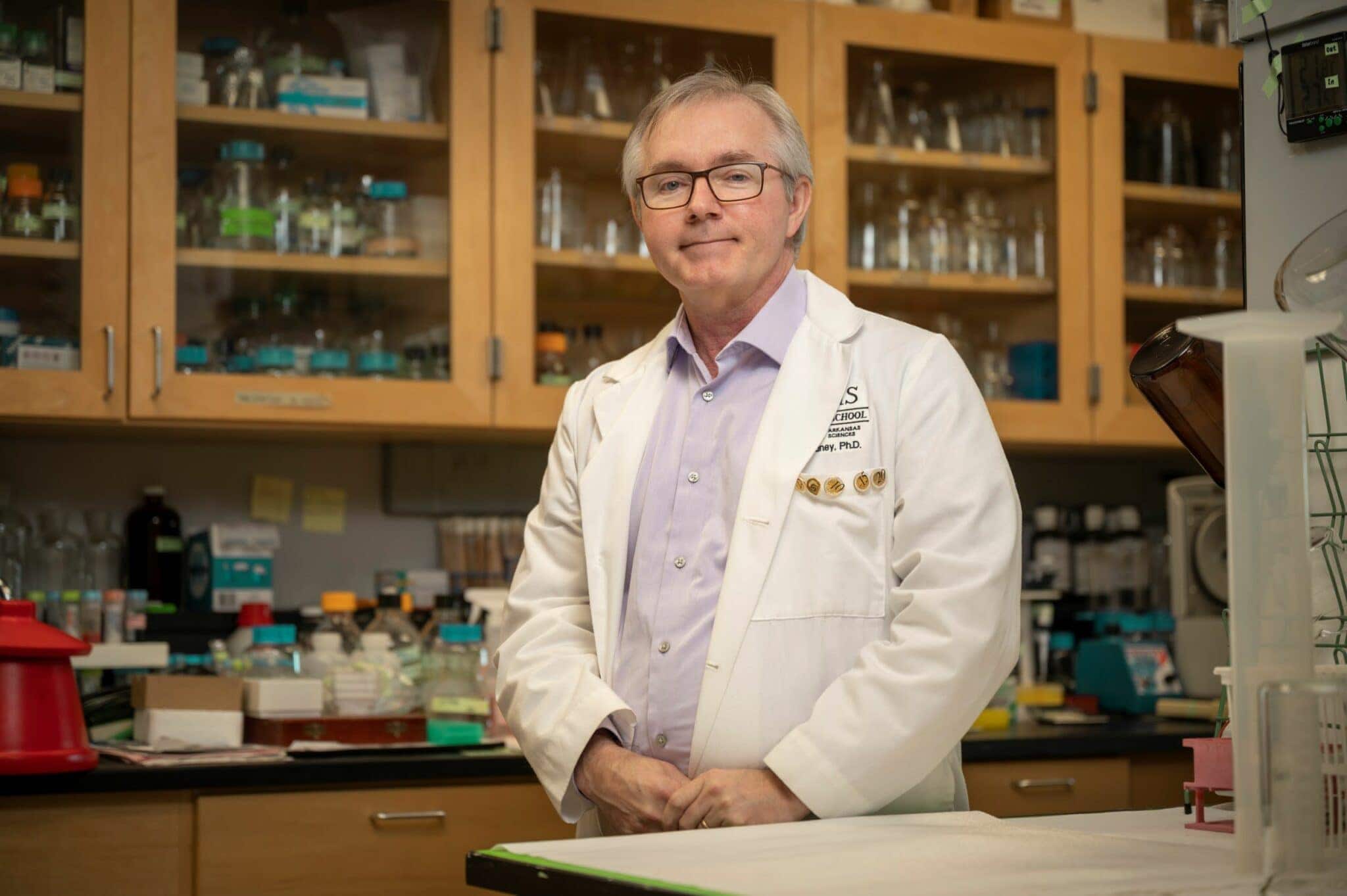 Kevin Raney, Ph.D., in his lab at UAMS. Image by Evan Lewis

Jan. 26, 2022  — Kevin D. Raney, Ph.D., a research leader at the University of Arkansas for Medical Sciences (UAMS), has been elected a Fellow of the American Association for the Advancement of Science (AAAS), the world’s largest general scientific society and publisher of the Science family of journals.

Raney is professor and chair of the Department of Biochemistry and Molecular Biology in the UAMS College of Medicine. He joins the 2021 class of 564 scientists, engineers and innovators from around the world spanning 24 disciplines for their scientifically and socially distinguished achievements.

“We were delighted in the College of Medicine that Dr. Raney has been recognized for his distinguished achievements to advance science,” said Susan S. Smyth, M.D., Ph.D., UAMS executive vice chancellor and dean of the college. “Dr. Raney is an outstanding leader and scientist.”

Election as an AAAS Fellow is an honor bestowed upon AAAS members by their peers. Raney is being recognized in the chemistry category for his important contributions to the field of molecular motor proteins on nucleic acids and the function of G-quadruplex nucleic acids during response to cellular stress.

The new Fellows will be featured in the AAAS News & Notes section of this month’s Science journal, and will be celebrated later this year during an in-person gathering when it is feasible from a public health and safety perspective.

AAAS is the world’s largest general scientific society and publisher of the journal Science, as well as Science Translational Medicine; Science Signaling; a digital, open-access journal, Science Advances; Science Immunology; and Science Robotics. AAAS was founded in 1848 and includes more than 250 affiliated societies and academies of science, serving 10 million individuals. The nonprofit AAAS is open to all and fulfills its mission to “advance science and serve society” through initiatives in science policy, international programs, science education, public engagement, and more. For additional information about AAAS, visit www.aaas.org.

Watch his interview with Dean Smyth.